Posted on August 14, 2012 by blurofwoodsmoke

AL Kennedy‘s talk at the book festival was an easy sell to me.  In fact, it’s one of the very few events that I bought a ticket to on the first day they were released because I knew I would be absolutely kicking myself if I missed it.

I’d already read some of her pieces about writing, which I found funny and humane (there are some in the Guardian, and on her website under the ‘For Writers’ section – although either my memory is bad, or there is less there than there used to be).  She’s very good on the actual day-to-day business of being a writer, and having to live with the inside of your head a lot (“it’s not good for you to sit in a room and be in charge of a world”).  This was exemplified in the very funny piece she read about being out in a writer’s cabin in New York State, plagued by woodpeckers.

What I didn’t know is that she has a book on writing coming out next year! So I am massively excited about that.

The interviewer for this was Sue MacGregor which made it even better – both of them are people I could listen to all day, so an hour was far too short.

I find AL Kennedy really inspiring because she seems so uncompromising in a good way – like she understands herself very well, and just makes things work for herself, even if other people might think she’s weird.  Something to aspire to I think.

Marianne Wheelaghan has a much more extensive account of this talk on her blog today – I recommend it.

In Clicket-y business, I went to see Danny MacAskill do ridiculous and incredible bike tricks on Castle St.  This was part of the art festival. I was a little sceptical of the link, but I have to say his work was beautiful and it definitely got an audience that wasn’t your typical art festival crowd – great outreach. Personally, I get a wee bit irritated with the ‘ooh, will he make it, will he not’ build-up to stuff that he’s clearly done a million times but it definitely worked with the kids in the crowd and some of the tricks were just extraordinary – glad I saw them! 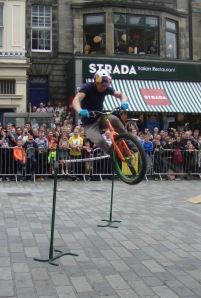 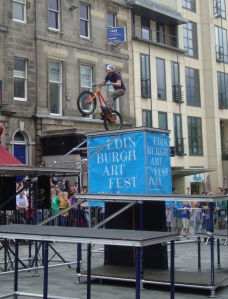 The rest of the day was all busy and writery
– participating in the Courtyard Reading at the Scottish Poetry Library (they’re at 2pm every day through the book festival, all welcome to drop in and read or listen)
– turning up at Story Shop at the book festival (4pm every day, free, highly recommended) for Martin Macauley’s marvellous and rather bleak story (which you can read here): I will never look at gulls in the same way again!
– and finally, a 6 hour marathon of spoken word at Blind Poetics.  Which…  well, there were lots of good performance poets but I don’t think I should read at midnight (which actually because 1am) ever again.  I am too old and my body won’t take it and decided to give me evil insomnia, so I’m kind of broken today.  But at least I did it once!